A cross-interdisciplinary collaboration is increasing the sustainable value creation in Norwegian aquaculture and agriculture by using industrial by-products as a nutrient source for yeast-based Single Cell Protein (SCP). The microbial ingredient is used as a high-value locally produced protein source in animal feed with health-promoting components. But how to meet the demand for more biomass? The success story of the Norwegian University of Life Sciences (NMBU) shows us a way to increase production capacity. 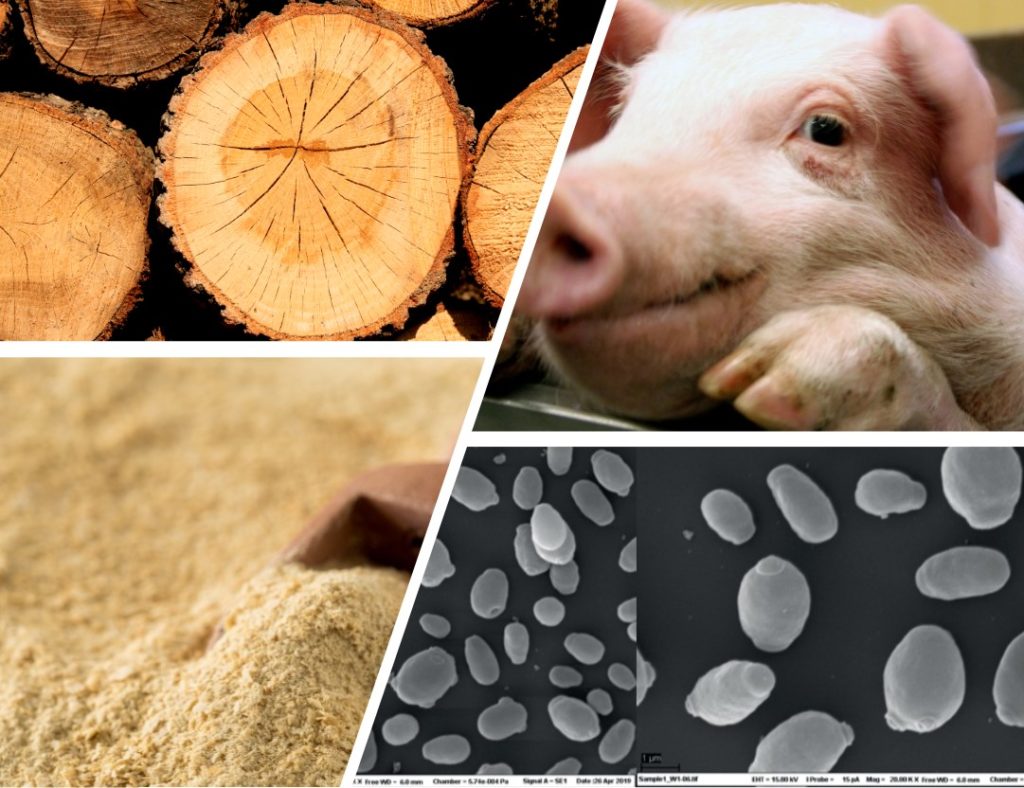 Value creation in the Norwegian aquaculture and agriculture: The Foods of Norway converts by-products to protein-rich feed ingredients

The Norwegian Centre for Research-based Innovation (CRI) is hosted by the Faculty of Biosciences at the Norwegian University of Life Science. Their goal is to increase value creation in aquaculture, meat and dairy industries. The centre, also known as Foods of Norway, is developing novel feed ingredients from natural bioresources. As a cross-disciplinary institution, it is forging close alliances between research-intensive enterprises and prominent research groups.

Foods of Norway spans across blue and green sectors, including agriculture, aquaculture and forestry to develop new sustainable feed solutions for fish and farmed animals. The Centre joins academia and industry along the value chain from forest by-products and various waste streams to highly nutritious feed ingredients and further to the final meat, fish and milk products. These waste streams are not low commodities but become high-value resources such as creating a basis for feed.

The Centre director Prof. Margareth Øverland is sure that this joint effort will fill an important need for the feed of tomorrow. A central topic of the research centre has been the development of efficient fermentation processes for the production of yeast biomass. This work has been led by Prof. Svein Jarle Horn, where skilful researchers and good fermentation infrastructure have been essential for success. 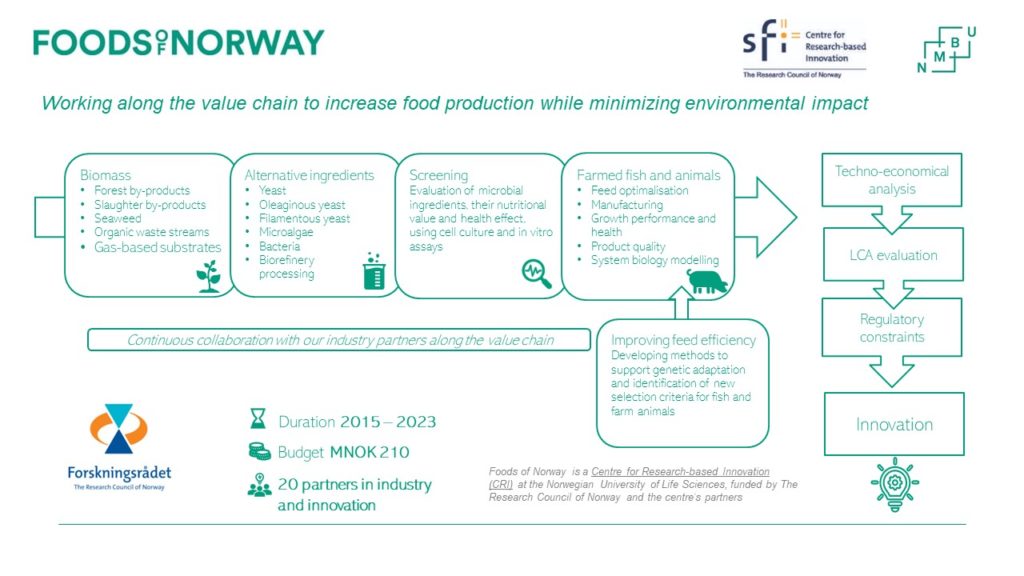 This interdisciplinary approach was also experienced by David Lapeña Gómez during his PhD thesis when he was faced with the challenge of producing enough single cell ingredients for feeding trials: “We had enough capacity to produce some kg of biomass for small scale feeding trials with salmon. However, the production for larger scales required an industrial setup. The rule is simple. For biomass production, the size of the bioreactor is a crucial factor.”, he explained;

Of course, such bottlenecks lead to fruitful collaborations with industry as previous experiences have shown, but this also requires availability to utilize the plant.

To meet the demand for large quantities of feed, and to deepen their expertise in pilot scaling, the Faculty of Chemistry, Biotechnology and Food Science at NMBU had to break new ground; through scaling-up fermentation capacity to produce larger amounts of biomass.

Scale-up and new cultivation strategies can be a great challenge. Where to start? Approaches that have been used in leadership management for years can be applied to the project design of a research mission: “Start with why”.

So why does Prof. Svein Jarle Horn’s Bioprocess technology research group want to tackle these challenges? For the efficient production of single cell protein.

Single cell protein (SCP), also known as bioprotein, is defined as a bulk of microbial cells as a protein source in human food or animal feed. As a potential high-quality dietary product, SCP can be produced from biodegradable waste, which is not only environmentally friendly way but also a healthy business activity.

Utilized as protein-rich supplements or ingredients in humans and animals’ diet microbial protein could contribute to meeting the increasing global demand for protein due to the increase in population and consumption.

Furthermore, SCP is a possible alternative to plant protein sources as the production does not require large areas of land or reservoirs of water and is also independent of seasonal and climatic variations (see Process Flow below). 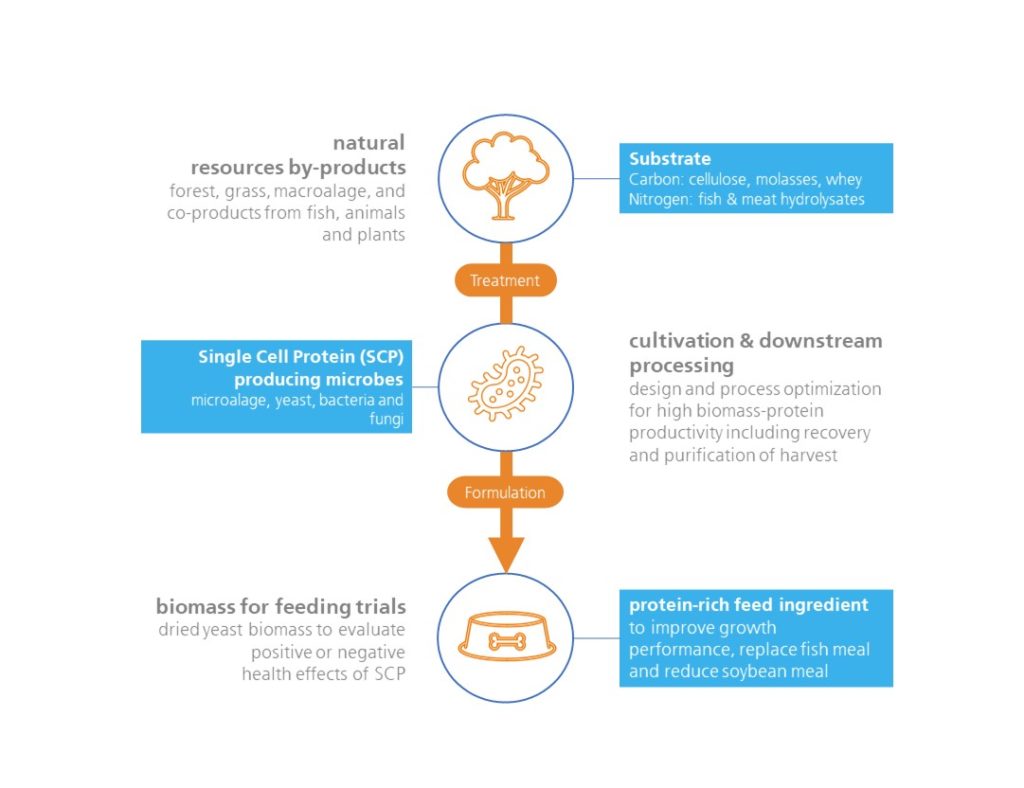 Microorganisms such as microalgae, yeast, fungi, and bacteria can be used as producers of SCP. Yeast has in addition to the high content of protein a favourable amino acids profile as well as several vitamins and health-promoting components such as beta-glucan, mannoproteins and nucleic acids (see visualization below).

Choosing the microorganism is crucial for a successful and cost-efficient SCP production. The selected microorganism needs to utilize cheap, available substrates or biodegradable by-products as a nutrient source.

Furthermore, it should not require additional growth factors to avoid price increases for the final product. Finally, the production in the bioreactor demands robustness for its cultivation, harvest, and downstream processing, without losing its essential characteristics when blended into feed and food formulas. 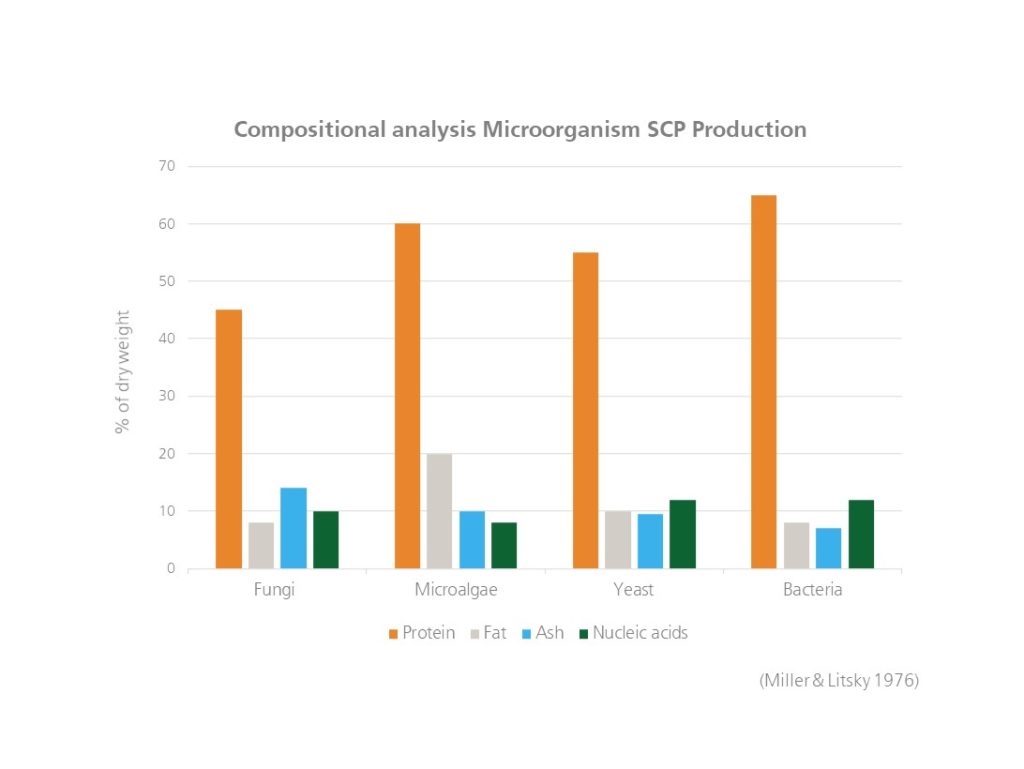 Visualization compositional analysis of different microorganisms used in the production of SCP. The maximal values are shown as % of dry weight and are derived from (Miller & Litsky, 1976).

Finding the ideal industrial by-products led David to endure hours of smelly meat since he prepared protein hydrolysates from pork and beef, chicken, and salmon.

“Everyone knew when I was working in the lab, mainly because they just could smell it and they were definitely not amused about it.”

He was therefore happy to complete and publish the research on screening of different protein hydrolysates as growth media components for the production of yeast biomass.

However, even though his studies so far allowed him to improve yield and productivity, to reach the required amount of biomass, production needs to be optimized and upscaled. We knew that a simple capacity increment would not be enough.

He had quickly thrown overboard the possibility of cultivating in fed-batch mode because of the insufficient quantity of biomass to be expected. On the other hand, a continuous culture would be a suitable strategy due to higher biomass productivity, but risky in its complex setup and the associated high risk of contamination. Despite the fact that this cultivation strategy would require more volumes of broth for the downstream process as the biomass concentration can be estimated to be comparatively low.

So, if the two common methods seem unsuitable, a third one as a hybrid of the two can remedy the situation.

How does the strategy work in comparison with fed-batch & continuous culture?

So, what does a hybrid of a continuous chemostat, and growth-controlling feed supply look like? Repeating. It is precisely this repetitive aspect that is the advantage of the repeated fed-batch (also called repeated-batch or semi-continuous) because it allows an increase in productivity without additional expense for recurring preparations, increased risk of contamination or more complicated downstream processing.

The design is simple: after the substrate from the batch culture has been used up and growth stagnates, a significant portion (between one and three quarters) of the bioreactor’s working volume is harvested and replaced with fresh medium, including the carbon substrate. The remaining suspension culture serves as inoculum for the next batch. This can be repeated over several cycles, the time period is determined by the specific growth rate and the profile of the substate recovery. Usually, the process is terminated after a few days (see schematic illustration below). 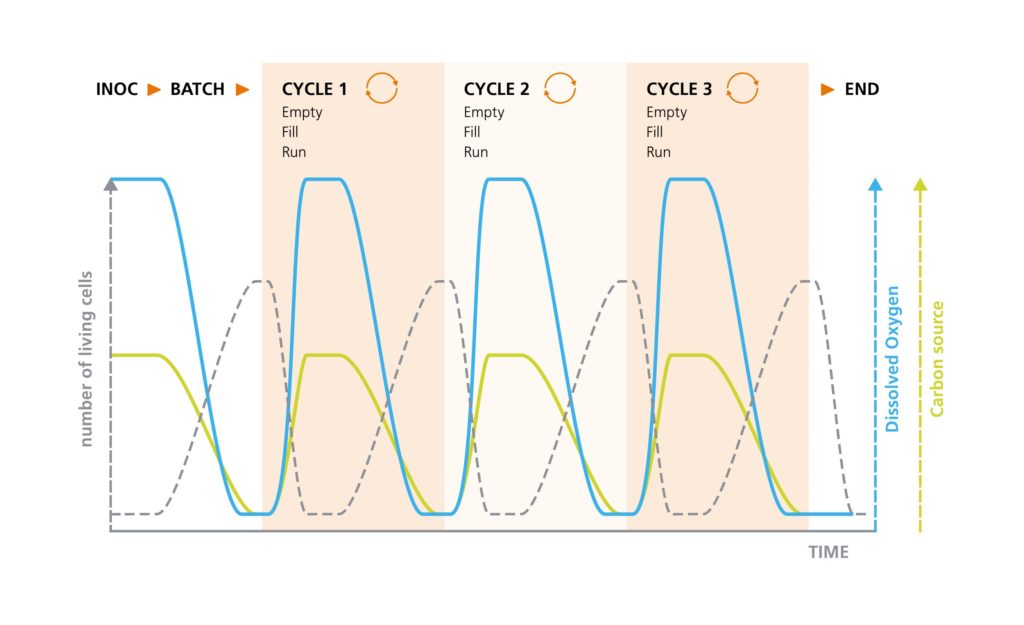 “The biggest advantage for us was definitely the time saved, and the ability to produce relatively large amounts of yeast even though the capacity of our bioreactor at the time was only 30 L working volume.”

, recalls David. Thus, this strategy has been successfully tested at the pilot scale for yeast-based SCP production developing sustainable and high-protein feed, using a spruce tree hydrolysate as carbon feedstock and animal hydrolysate as a nitrogen source

David focused in his research on the development and optimization of fermentation medium and processes with the goal to minimize the costs of the final product, while simultaneously culturing yeast with high protein content.

We have already taken a closer look at the schematic representation (P&ID) in the last blog post. With this bioreactor configuration, David and his colleagues were able to cultivate yeast strains in repeated fed-batch mode up to a scale of 30L.

This way, Prof. Svein Jarle Horn’s research group has developed an efficient approach for increasing microbial protein production. Horn thinks that we are now only seeing the beginning of a new agricultural revolution where proteins are efficiently produced 24/7 in industrial bioreactors. Horn says that his group will continue their research on making microbial feed ingredients, including the use of heterotrophic algae to produce omega-3 fatty acids. They will also start working on using filamentous fungi for feed and food ingredients. In all cases, scale-up is important for them to link research to industrial applications.

“Only recently, we have now received the new success ingredient to achieving our goals: the 100L stainless steel bioreactor. Now nothing stands in our way to produce more microbial biomass!”

During his time at NMBU, David was able to learn the different aspects of innovation-driven research, strengthening his understanding of cross-disciplinary collaborations. This success story has certainly taught him that:

After being a customer himself, he understands what is important to one. David will always keep the laboratory mindset because after all, he is still a scientist. 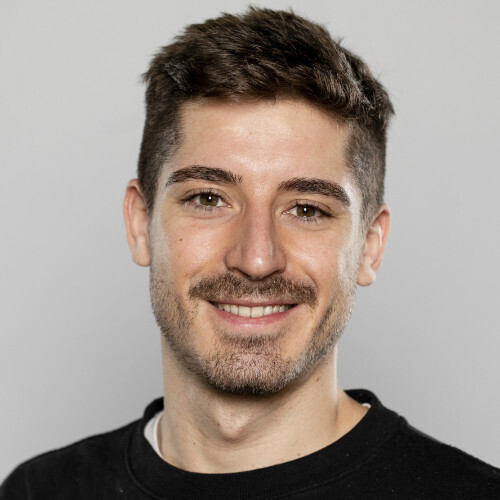 David Lapeña Gómez holds a BSc in Agricultural Engineering from the Technical University of Madrid as well as an MSc from the Technical University of Denmark in Food Technology and a PhD from Norwegian University of Life Sciences in Biotechnology. With his great interest in sustainable value creation and process optimisation, he is driven first and foremost by his commitment to helping others. Since October, he has been skilfully applying this in his new position as Area Sales Manager for Southern Europe. The move from Norway to Switzerland is an easy one for the frequent traveller, as both countries offer great opportunities for outdoor activities, which he particularly enjoys. 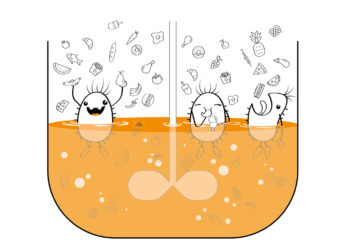 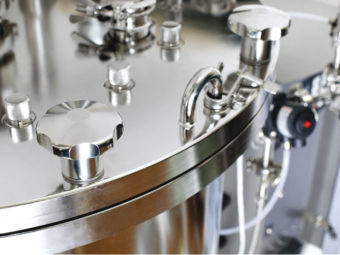 What is a P&ID and how can I use it to understand my bioreactor better?

The scale–up from bench-top bioreactors to larger, pilot systems can seem daunting. The list of user requirements specifications is much longer, and the manufacturer will provide a peculiar drawing called a P&ID. Reading these is second nature to a Bioprocess Engineer. For someone without such a background, this may be a strange concept. Nevertheless, with a bioreactor in the centre of your process, it is vital to link bioprocess technology and mechanical engineering in a schematic representation. This article shows you how to interpret your P&ID and to understand the functionalities of your bioreactor and its capabilities. 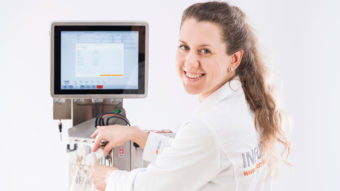 Continuous culture is best explained by discussing the basic components of the process. The theory is well known and simple to understand: Medium is both added and removed throughout much of the fermentation in order to keep cell numbers in balance. Actual execution can be difficult for starters, as there are more pumps, tubes and considerations than a simple batch fermentation.