The Top 5 Things to Know for Successful Pichia Fermentation

Several key factors are essential for successful fermentation of pichia pastoris. Here comes a brief and simple overview on what is needed for process optimization in terms of the capability of the hardware used. 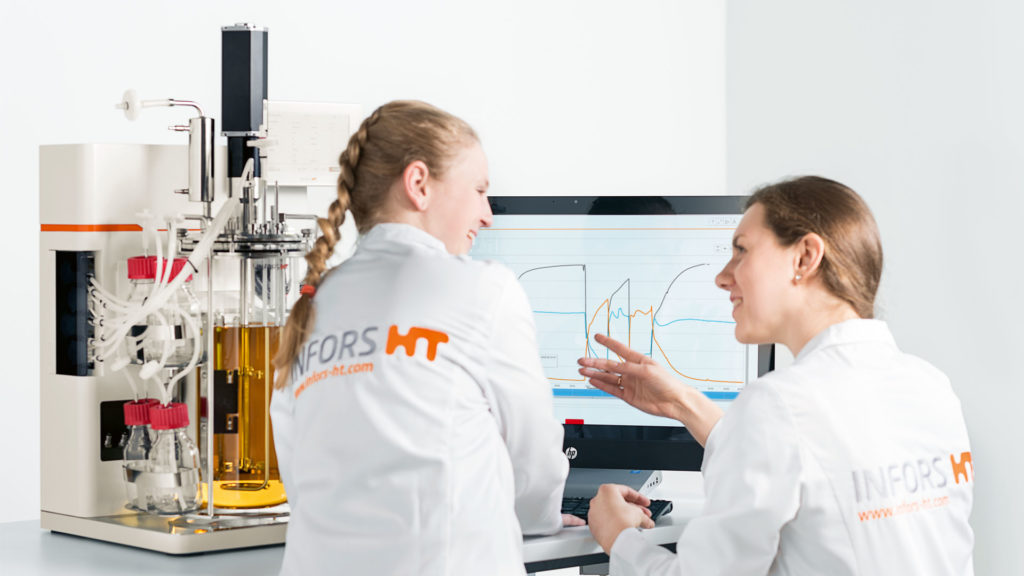 The culture of the methylotrophic yeast Pichia pastoris is a standard microbe in recombinant protein bioprocesses. Commercial use in the 1970’s was aimed at using Pichia as an animal feed. As an expression system, it has several advantages:

The cultivation of Pichia in a bioreactor comes with few challenges:

The solutions to these problems depend on the capabilities of the bioreactors used. The following short overview will help to fill in some of these details.

High cell densities demand a high rate of oxygen transfer. For this a powerful motor sized to the vessel volume is needed, allowing high speeds to be reached even with large volumes. The size, type and number of impellors are also critical. Flat-bladed Rushton impellers of 0.33 the vessel diameter are optimal to work with baffles. Large bubbles from the gas sparger are broken into many smaller ones which increases the surface area for gas transfer. Durability and reliability of the drive system play a key part for Pichia fermentations as they have a typical duration of 60 hours. Over half of that time will be under conditions of maximum load.

The gassing capabilities are also important. Not just in terms of overall maximum volume but also the level of control. Integrated mass flow valves can supply both feedback and control for process optimization. The ability to supplement the air stream with pure oxygen can allow Pichia cultures to reach higher cell densities than it would be possible with air alone.

Comparing the gas-liquid interface of bubbles. Smaller bubbles have two advantages for oxygen transport compared with larger bubbles: A larger gas-liquid interface per unit of liquid volume as well as a longer residence time in the medium, allowing more oxygen to be transferred into the liquid.

The ability to cool the vessel against sudden, rapid increases in temperature is necessary for successful Pichia fermentation. This depends on the temperature difference between the culture and the coolant, the surface area in contact for heat transfer and the rate of flow through the cooling system. A recirculating chiller with a 50/50 propylene glycol coolant is almost certain to be needed for high cell densities and this could be run with as much as 20°C Delta T.

A jacketed vessel or an external thermal block can be used. If cooling is not adequate, a cold finger can be added to an available port to put the coolant in closer contact with the culture liquid. This could either be controlled by a modified temperature control loop to be turned on as needed or counterheating used if cold water flowed constantly through the cold finger.

Two pumps are needed to supply:

A blending of the glycerol and methanol as an intermediate phase is also possible. Methanol may be provided in bursts, with starvation periods in between or feed rates kept close to starvation levels.

Therefore, peristaltic pumps are needed which are capable of exact delivery across a range of flow rates. A pump can be re-allocated to deliver a feed rather than e.g., antifoam. In this example, the loss of the antifoam pump could be mitigated by adding low levels of antifoam reagent into the feed, or by adding a mechanical foam breaker at the liquid/gas interface. 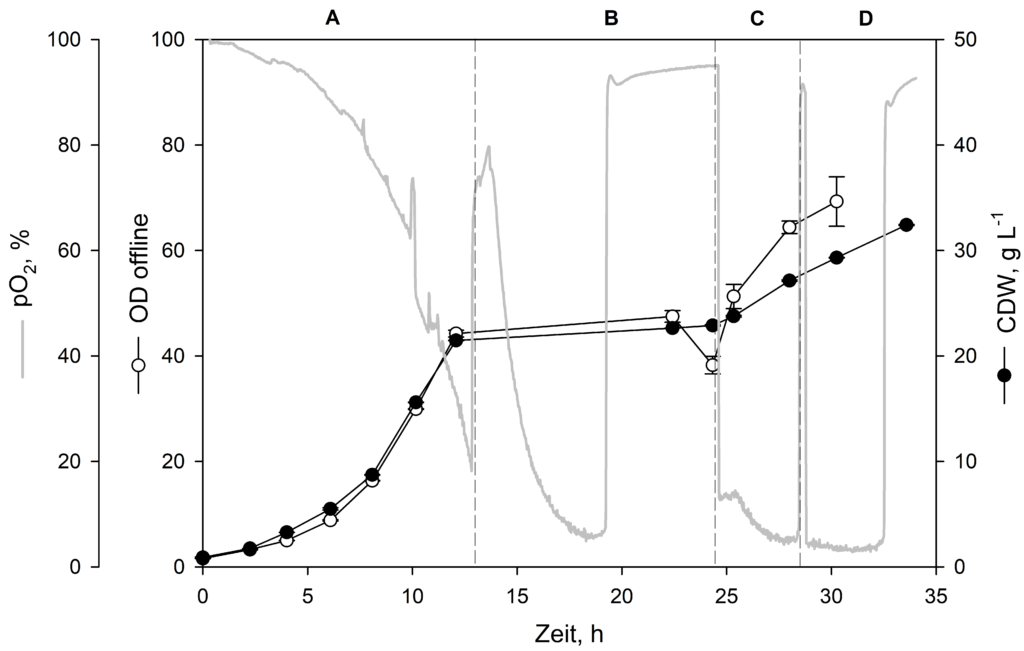 The local control at the bioreactor mediated by the Human Machine Interface (HMI) will provide options for cascade control of dissolved oxygen across several different parameters. Control can begin by stirrer speed and then transfer to air flow when it has reached a user-defined maximum. The next step would be to use gas mixing to supplement the air flow with oxygen. This needs no user intervention and results in a carefully graded response to changing conditions.

Furthermore, the use of bioprocess control software can take the degree of automation to a new level. It now becomes possible to look for spikes in dissolved oxygen (which shows all the substrate has been used by the cells) and use this to automatically change feeds and/or start pulsed feeding. Workflow control can divide the process into phases and have different operating conditions for each phase. These can be linear or looped to repeat certain steps.

In addition, physical sensors in or around the vessel can supply data on cell growth and metabolism. Soft sensors can use simple readings from the physical sensors to calculate other, indirect values more related to cell metabolism. These factors can then alter the control parameters in real–time.

Automation with cascades and workflows can optimise the fermentation process.

Use sensors for a better measurement of cell densities

Extending the capabilities of a basic bioreactor with more sensors is a big advantage for Pichia culture. The two most used are: 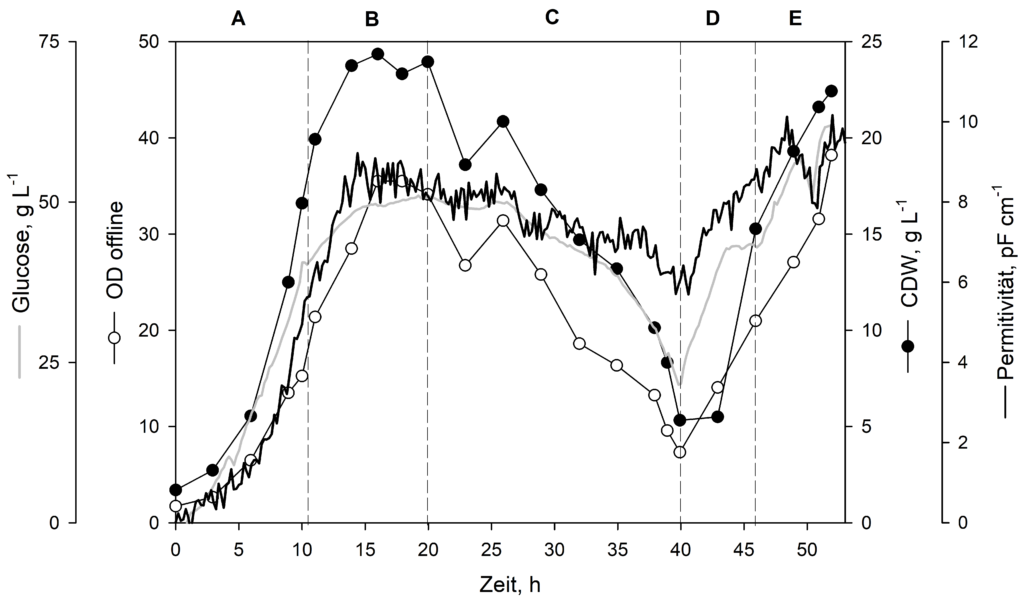 Comparison between online biomass-monitoring sensors in the Minifors 2 bioreactor during continuous cultivation. An initial batch phase (A) was followed by a phase with a constant dilution rate (B), a phase with a controlled elution step (C), a biomass re-enrichment phase (D), and a phase focused on product formation (E).

This has been a brief and simple overview of Pichia fermentation for newcomers. The main points have focussed on what is needed for process optimization in terms of the capability of the hardware used.

The key factors identified as being of importance are:

Values for growth rate, yields etc. can be found in the relevant application note available from INFORS-HT: Biological and process-engineering characterization of the Minifors 2 laboratory bioreactor.

Thank you very much or the positive feedback.